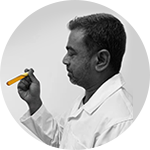 Sathesh Roy is the founder of Healing Cell Pte Ltd. Since young, he has been curious about traditional herbs. He began reading and exploring the manuscripts and eventually came out with a few simple formulas which could help mankind. He began experimenting on various species of turmeric(Curcuma Longa) and learning how to blend them. His personal findings had shown that some turmeric species decay rapidly thus making the plant ineffective for purpose of treatment. However, his passion in sharing and helping the injured and the sick, which he could reach out to, did not dwindle even though knowing the outcome of the findings. His “Never Give Up” attitude spurred him to continue in search of ways to overcome this obstacle. His effort finally paid off when he happened to chance upon a new and upcoming “Nano Technology” and how it could better help mankind. It was then he struck “Eureka” where he started to question himself: “What if I could isolate components in plant and herbs and extract them to benefit mankind?” With that in mind and much effort being made, he managed to come across a research institute based in Switzerland where he resided for 3 years in order to conduct his Research and Development to identify active genes and characteristics of certain plants.

His effort finally paid off again. It only took him about 2 years where he eventually produced sample of Nano Curcumin serum extract. In order to further prove the positive results, he continued with the in-house laboratory tests for another year in Switzerland.

After 3 years in Switzerland, he brought samples of Nano Curcumin serum to Hawaii and USA to test it on sick patients. As the Nano Curcumin serum is pure plant extract, most of the patients tested were able to adapt to it. And within a few weeks, most of them had positive results and began to show sign of improvement in their health.

Subsequently. he shared the Nano Curcumin serum with his friends and family in Singapore and similarly, it showed positive results too.